I was given the opportunity to drive a 2015 Mitsubishi Outlander for a week and express my opinion truthfully and honestly and as always that's what I've done and you can read about my experience below. 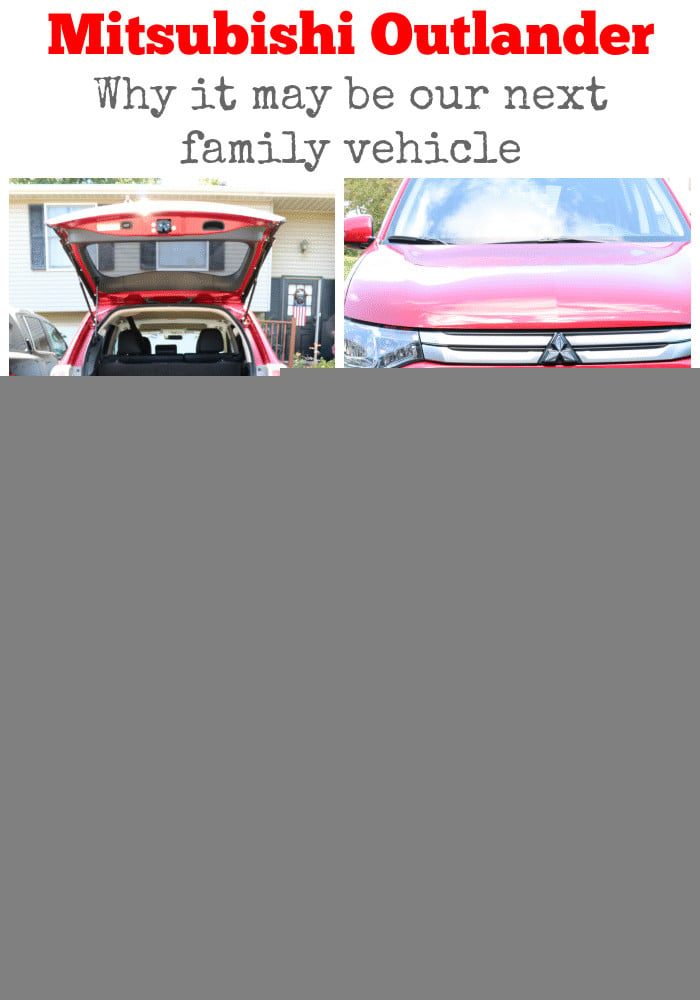 I have something to share that you may not know about me.  I not only love airplanes (just like my bio says) but I LOVE cars, too.  Some women like shoes, some like handbags...for me it's just about anything with an engine.  Something in me gets downright giddy when I see a cool car or better yet when I get to DRIVE a new car.  I honestly can't take it.  It's almost like being in high school and the boy you have a secret crush on talks to you...acknowledges that you exist...swoon! Except for me, I don't swoon, I giggle.  It is an annoying giggle but it's how I react.

A few weeks ago the awesome folks at DriveShop USA dropped off a Rally Red with Black interior (insert my annoying giggle) 2015 Mitsubishi Outlander at my door.  I have never driven a Mitsubishi.  I have driven BMW's, Mercedes Benz (not sure how to make that plural), Audi's, and all of the traditional American Brand Beefy Cars but never a Mitsubishi.  I went into this not sure what to expect but once I started it (One-touch Start/Stop engine switch~ totally new to me!) I was impressed.  Something about it just felt right. 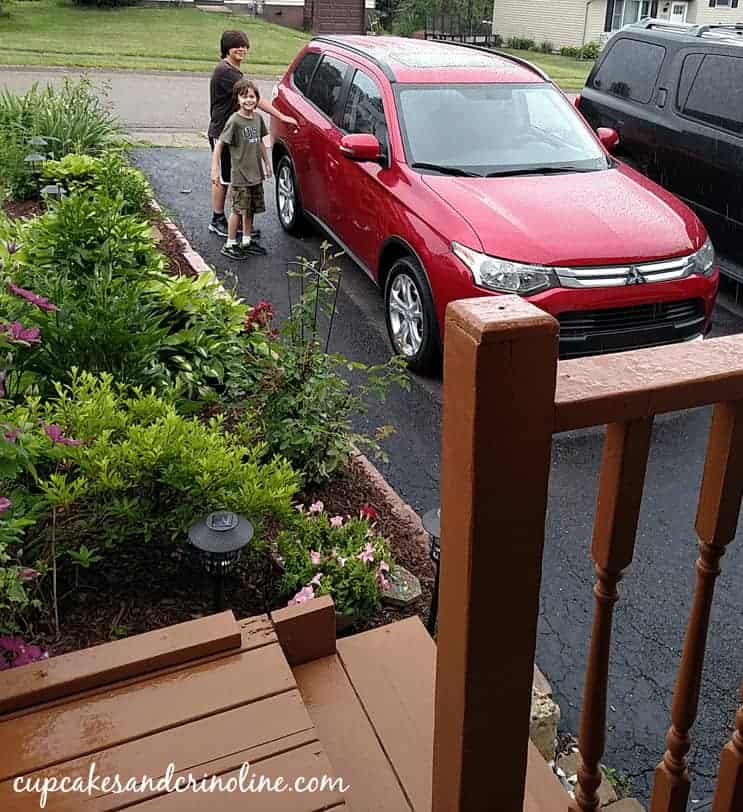 I grabbed #2 and #3 sons and my husband and told them we were going on a mini adventure! I started to drive and oh.my.word. it was fantastic.  I live on the top of a really big hill with steep hills surrounding it branching off from the main hill.  I wanted to put the Outlander to the test so I commenced heading down a very windy road and noticed first off how well the vehicle handled.  I was able to take tight turns easily and comfortably without any issue. 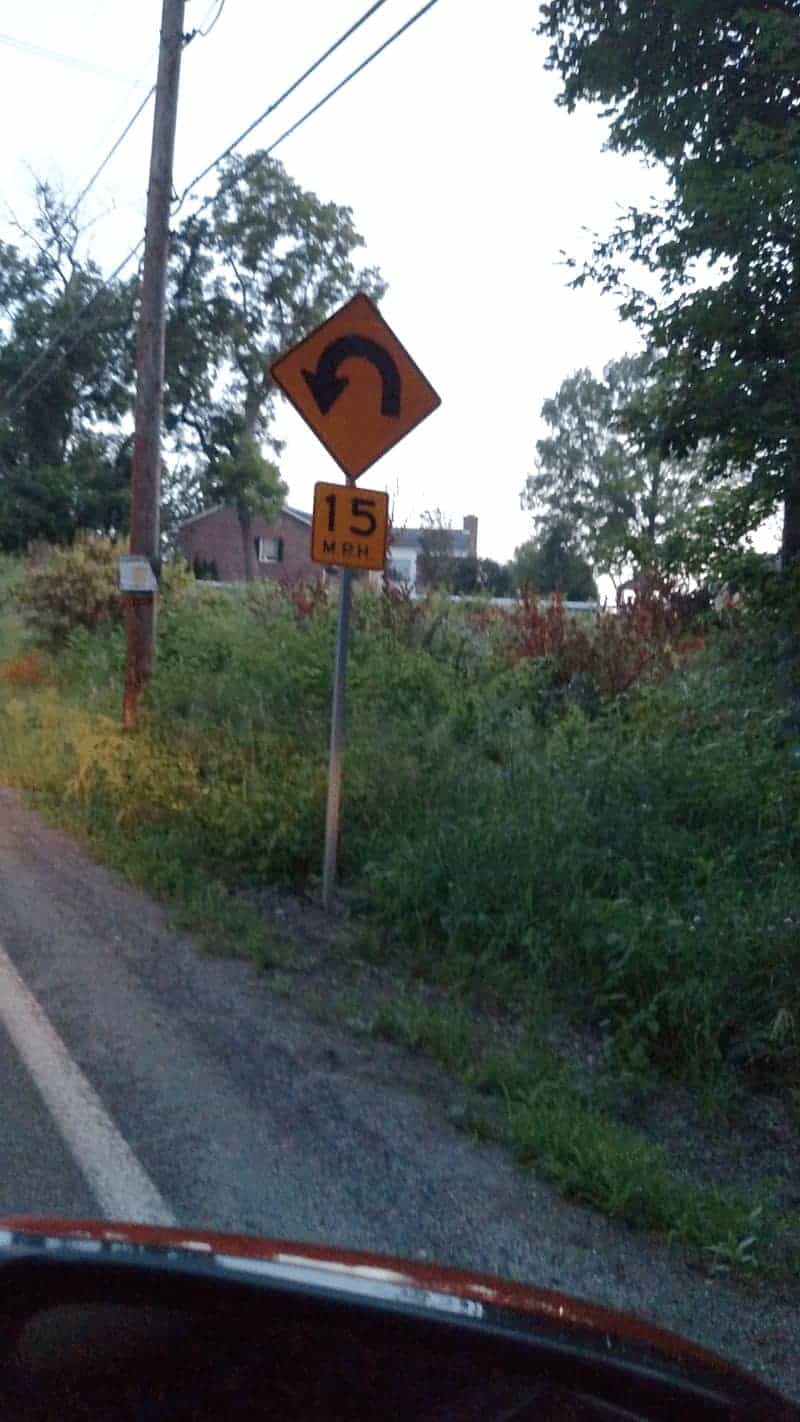 Once I made it the several miles to the bottom of the hill I started to head back up ~ and I took every side road with extremely steep hills, horseshoe turns and bends that I could.  The result ~ the Mitsubishi Outlander never once decreased speed or had any problems whatsoever making it up the hills.  It was like it was made for just such a purpose. 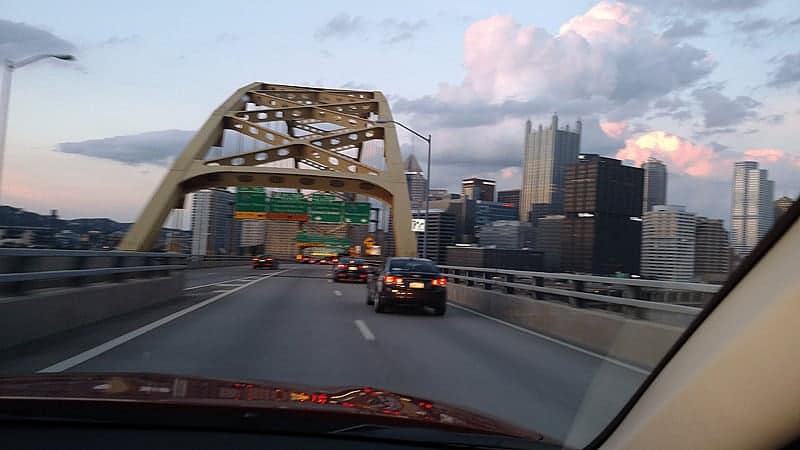 Next up we headed home, picked up #1 son, opened the sunroof (insert another giggle) and headed for the highway and downtown Pittsburgh (for those of you from SW PA you know that's pronounced dahntahn). 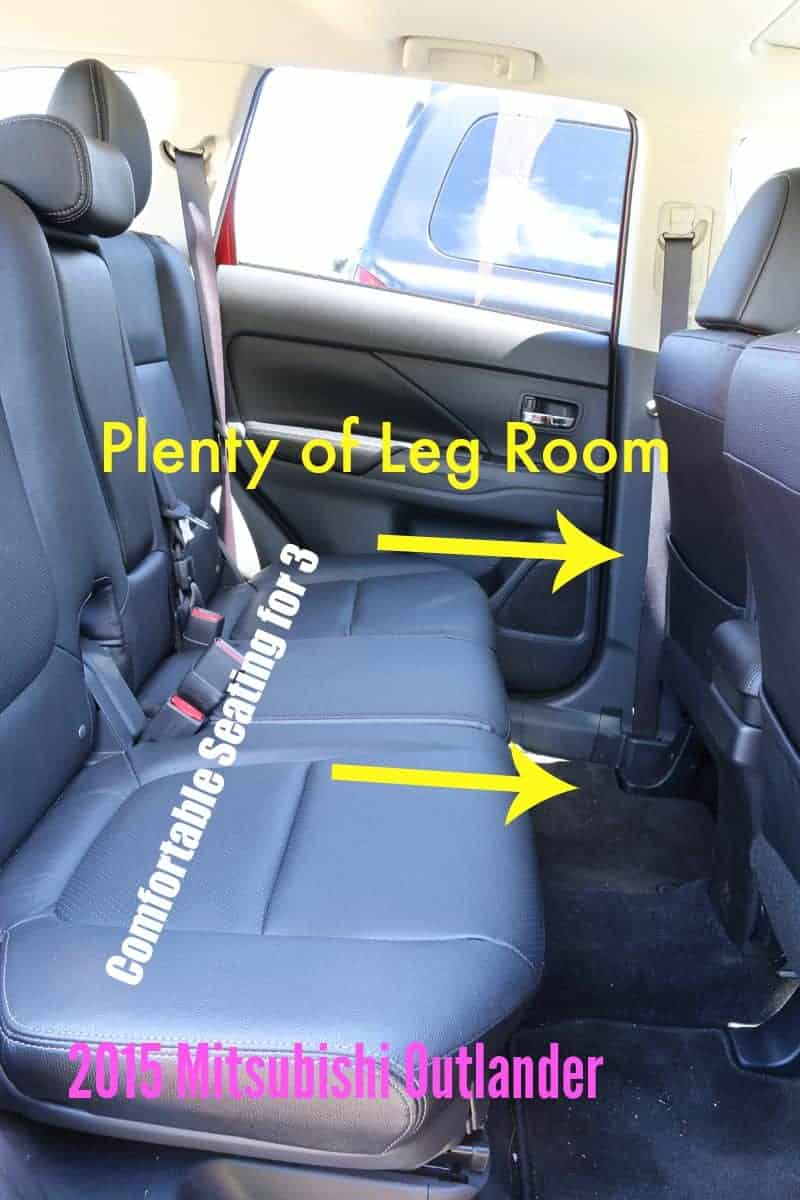 Now...here's where this gets interesting.  I NEVER drive downtown.  NEVER.  There is a very simple reason for that.  I currently own a 10-year-old BEAST of an SUV that does not fit in any of the parking garages.  Not only that but being from Pittsburgh it seems there is always some road to get to downtown that is under construction and driving said Beast on those roads totally freaks me out.  There are also bridges, tunnels and lots of merging...I do not like merging in the Beast.  I always feel like it is just too wide and then I start to white knuckle it and sweat but the Outlander felt so comfortable to me that I was ready for the task and so I drove.  It was my 10 year old's FIRST time to see downtown Pittsburgh....we were all totally thrilled and I actually broke through one of my fears....I did it...I drove downtown thanks to the Outlander.  Please don't for one minute think I'm being dramatic...I'm really not and it meant the world to me to be able to finally do it again after so many years.  I had done some research prior to the trip and knew that the Outlander was a very safe vehicle ~ it has 7 airbags plus multiple safety features (listed here) so I had an inner peace driving that I haven't had in ages.  Side note:  The beast needed a major repair while we were away a little over a year ago and since that drive I have been really hesitant to drive it anywhere ~ I was doing 70 MPH and enjoying the drive and when we arrived at our destination it started to make this horrible, horrible grinding noise and off to a garage in an unknown town 100's of miles from home it went to have work done on it....I feel sick even thinking about it now. 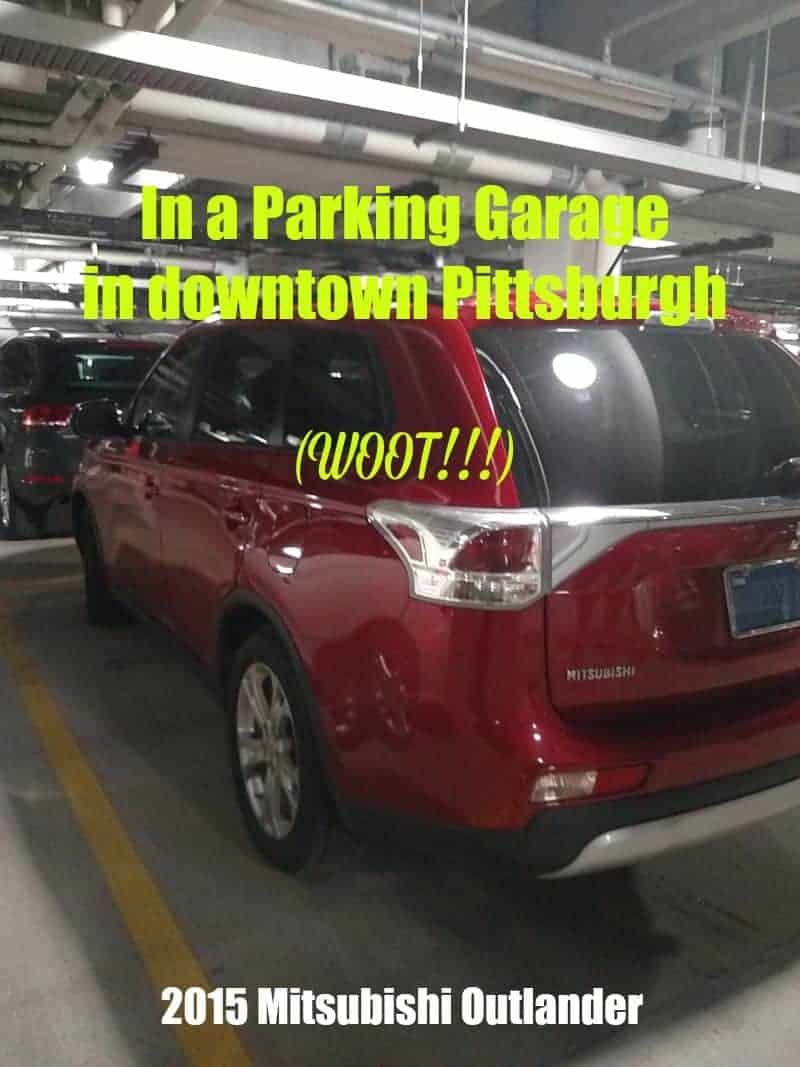 Back to the Outlander, here's where the experience gets EVEN better.  I hadn't seen my oldest niece in 7 years.  She lives at least a 2-day's drive away from me and with work and life we hadn't seen each other in way too long.  I sent her a text the day the Mitsubishi arrived  (concerning something totally not related to it!) and she responded that she would be seeing me that upcoming Saturday!?!? Say what??? Well, I wasn't sure if she was serious or just kidding with me but she did in fact (BIG YAY) arrive that Saturday with her youngest daughter (whom I had never met). 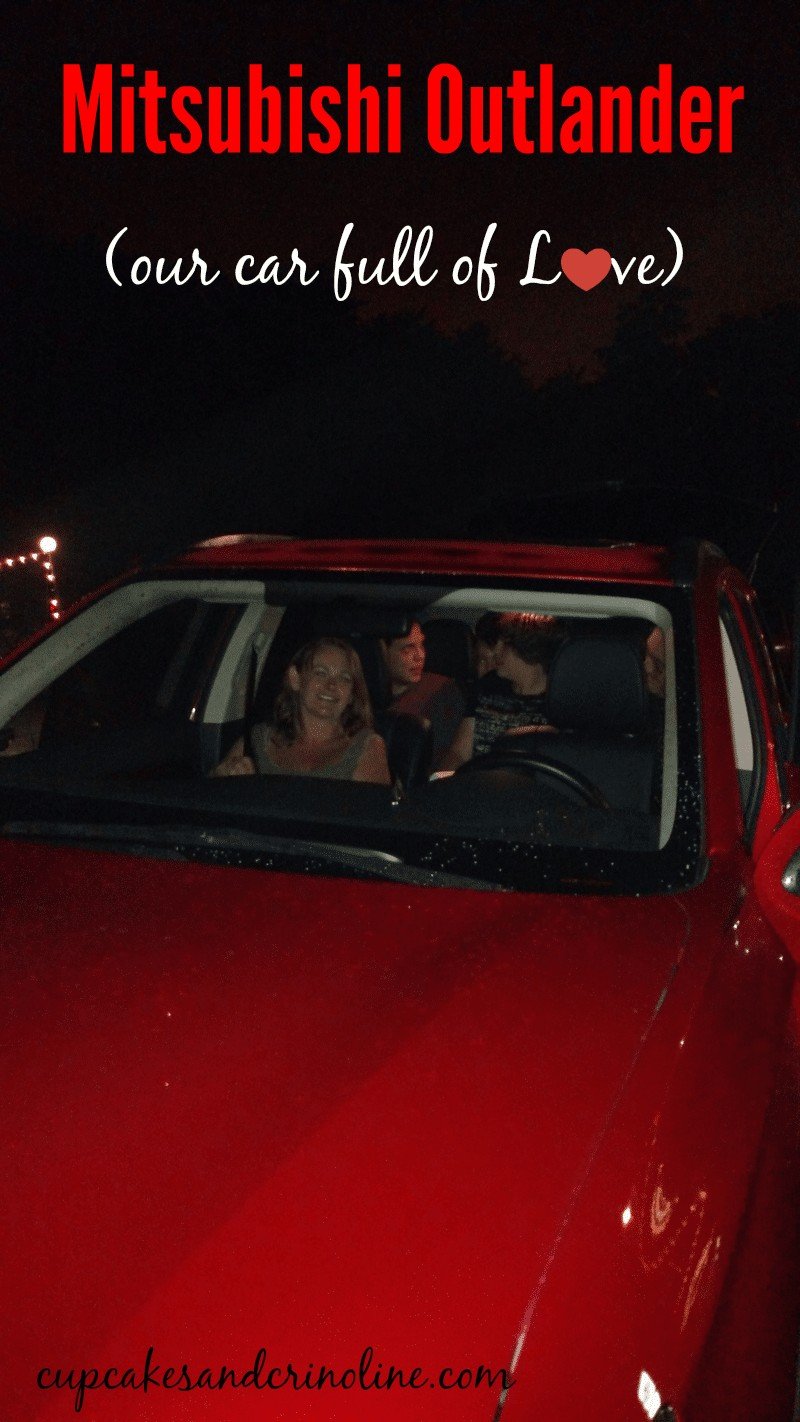 We were all so happy to see each other and...we were hungry so we flipped up the third row of seats on the Outlander (did I mention it fits 7???) and we all went out to dinner. 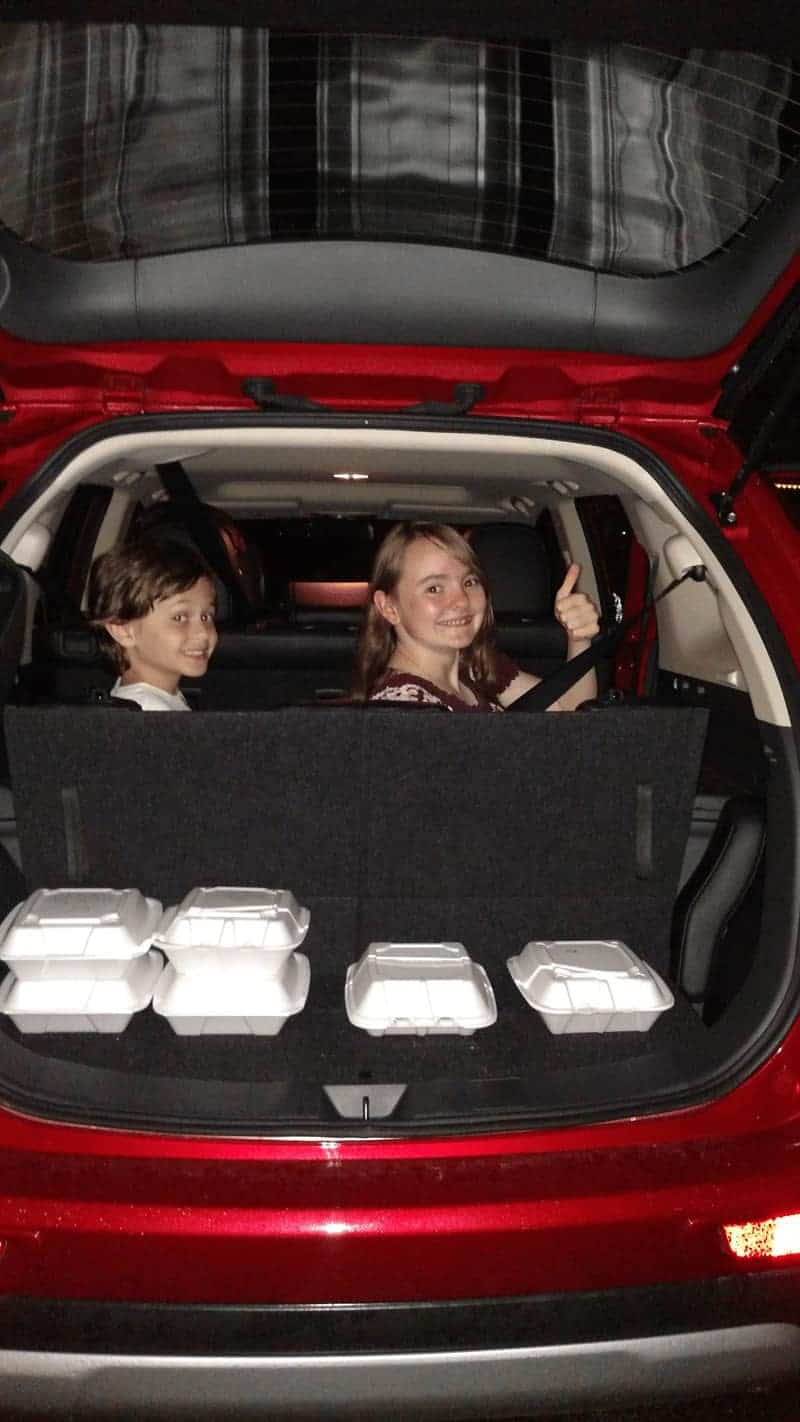 After dinner we all got back into the car with our leftovers ~ that's my youngest and my niece's daughter together....first time meeting (cousins!!!!) 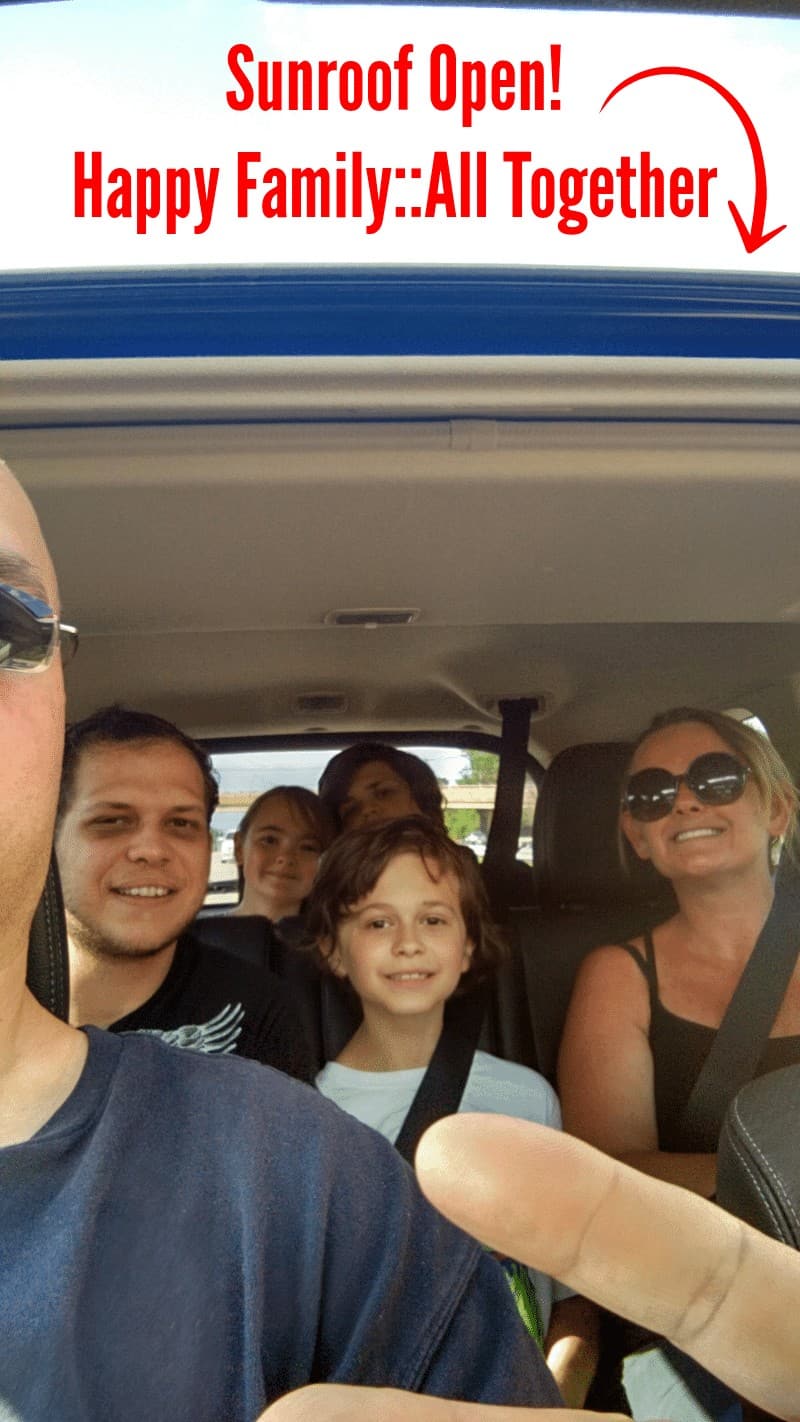 The next day, we took another trip downtown Pittsburgh to ride the incline.  Yep....all 7 of us in one car very comfortably. 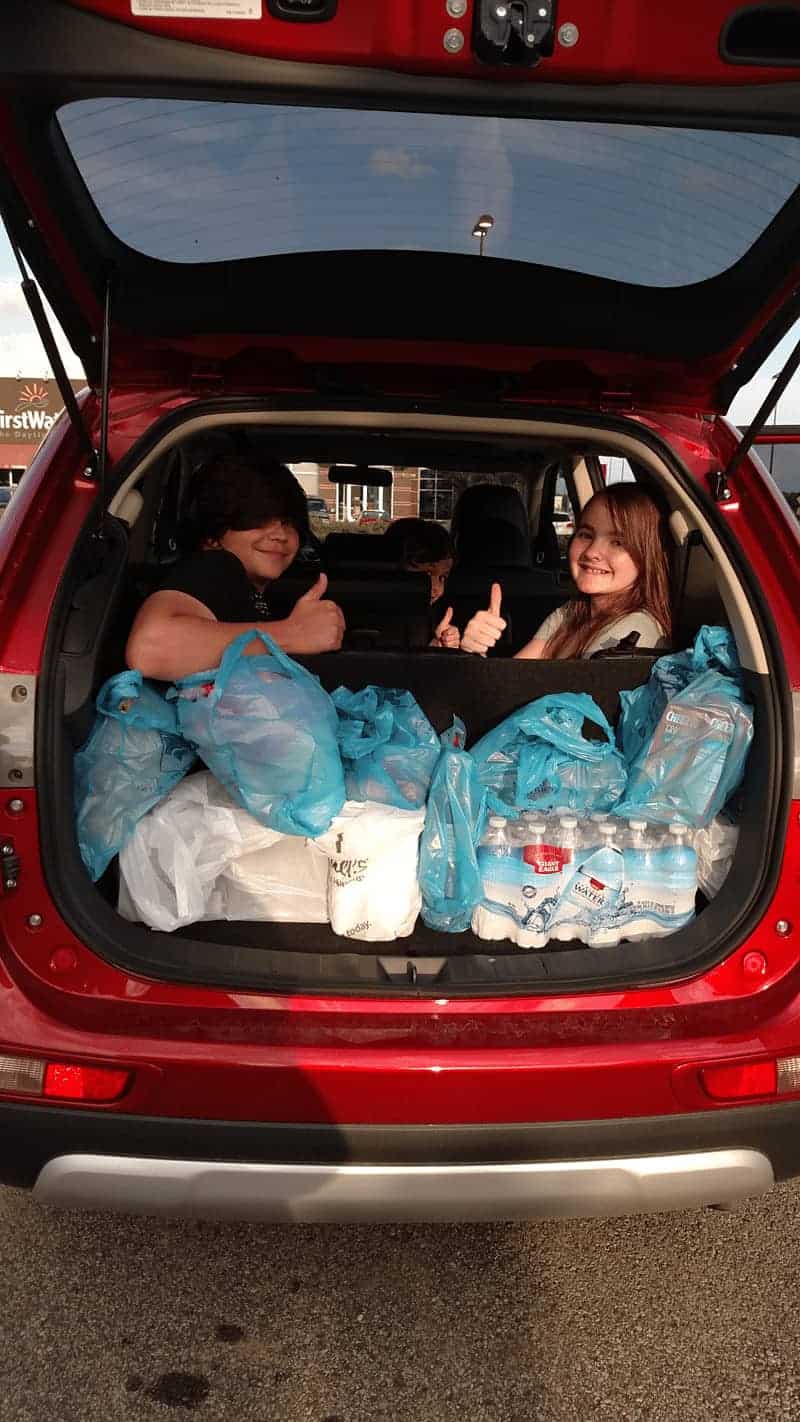 The timing was perfect and so was the Outlander.  It was just what we needed.  My middle son and my niece's daughter sat in the third row and I asked them if it was comfortable....their resounding answer was, "yes!".  (We took a side trip before heading downtown to get some munchies for the 30 minute ride....my kids eat alot, and to get some crafts at Michael's-I never pass up an opportunity to stop!) 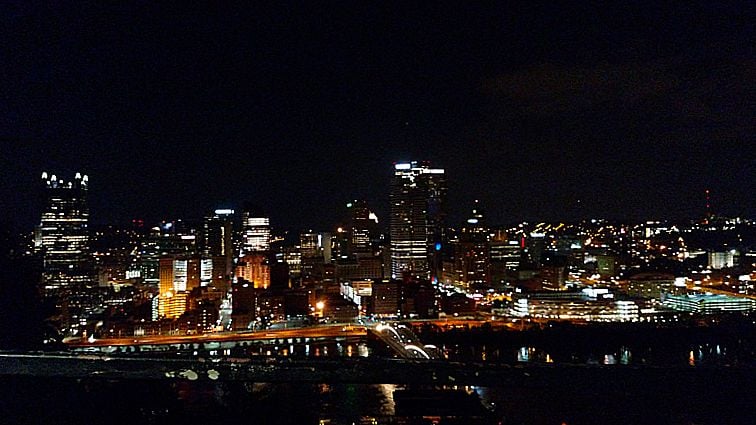 After taking a ride on the incline this is the view from Mt. Washington of downtown Pittsburgh at night ~ beautiful, isn't it? ~ another first for my two younger sons and my niece!

We went on so many drives the week I had the Outlander it was like we were on a vacation and I could drive and feel safe and absolutely awesome.  We're also a big music family and the sound system was AMAZING ~ it's a Rockford Fosgate Premium Audio System and the sound was rich, deep and fabulous.  While the vehicle did come with Sirius we mostly listened to music from my smartphone.  I paired the phone (super easy) and then streamed away.  There was never a glitch and we listened to all of our favorite tunes (and I listened to my podcasts). 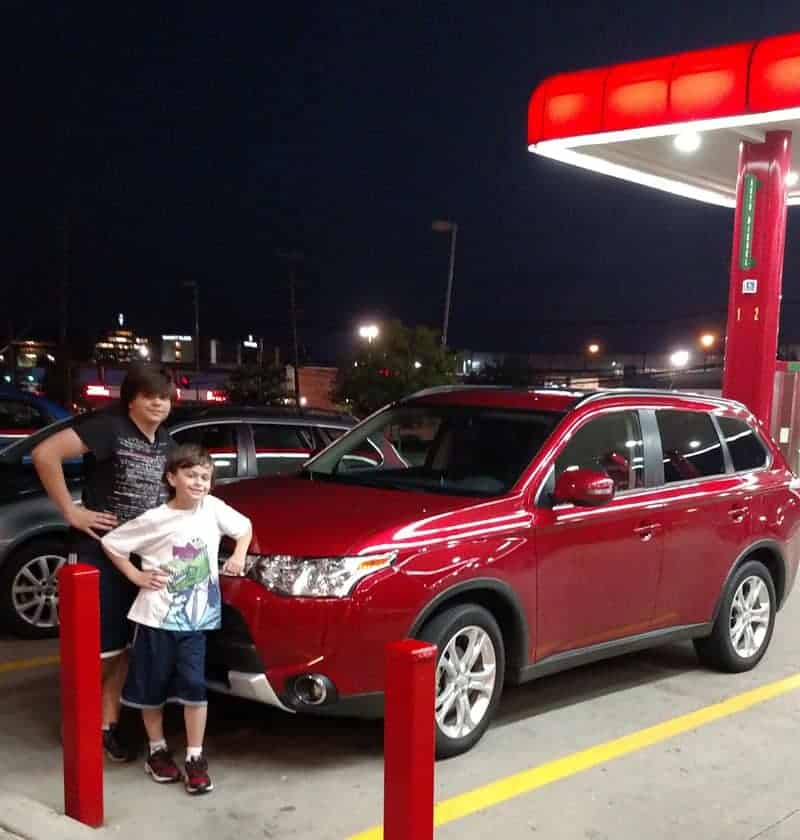 I took the car out EVERY SINGLE DAY I had it....when I woke up I would think to myself, "where can I go today" and before bed I always asked if anyone wanted to go for a ride with me and everytime I had a car full. 😉

The great thing about this opportunity was that unlike a test drive I had the car for an entire week ~ long enough to really get a feel for it and know whether or not I liked it.  I couldn't find even one thing I didn't like about it....not ONE.  I liked it so much that we are possibly considering trading in the Beast and getting an Outlander.  Don't tell the Beast...while she was sitting in the driveway idle I think I may have seen a teardrop roll down her headlights...or it could have been rain...I'm not sure. 😉

Overall, the 2015 Mitsubishi Outlander was a bit hit with the family!

The 2015's are still available at dealerships but the 2016 will be coming out soon with over 100 improvements (not sure what they could improve!?!)~ you can see and build your own at:  https://www.mitsubishicars.com/outlander