Patriotic Glassine Confetti Packets from I Should Be Mopping the Floor

Red, White, and Blue Fudge from Growing Up Gabel

Red, White, and Blue No Churn Ice Cream from Growing Up Gabel

4th of July Rice Krispies Pops from The Jenny Evolution

4th of July Patriotic Snack Mix from The Jenny Evolution

4th of July Printables from The Jenny Evolution

Red, White and Blue Virgin White Sangria from The Kitchen is My Playground

Red, White and Blue Cherry Almond Cookies from The Kitchen is My Playground

Thank you to everyone who shared their creativity! 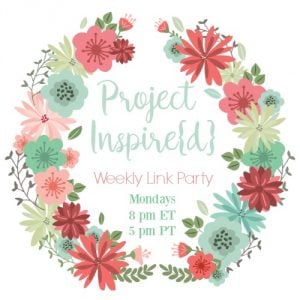 Join me and my dear friend Malia from Yesterday on Tuesday every Monday at 5 pm Pacific/8 pm Eastern for Project Inspired!

Personalize a Mug with Cricut Vinyl
← Previous
Today Only Get this Amazing Pies and Tarts Class FREE from Craftsy!
Next →
Click here to cancel reply.

Thank you for highlighting my post "An Old Fashioned 4th of July Tablescape" on your blog. I very much appreciate it.

You're welcome, Lisa! Thanks so much for joining this week's party. xo