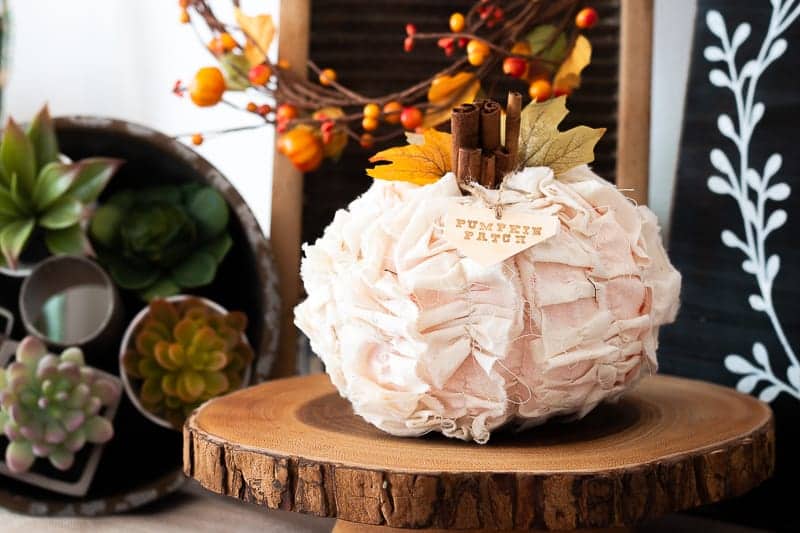 Pin it Now So You Have It for Later 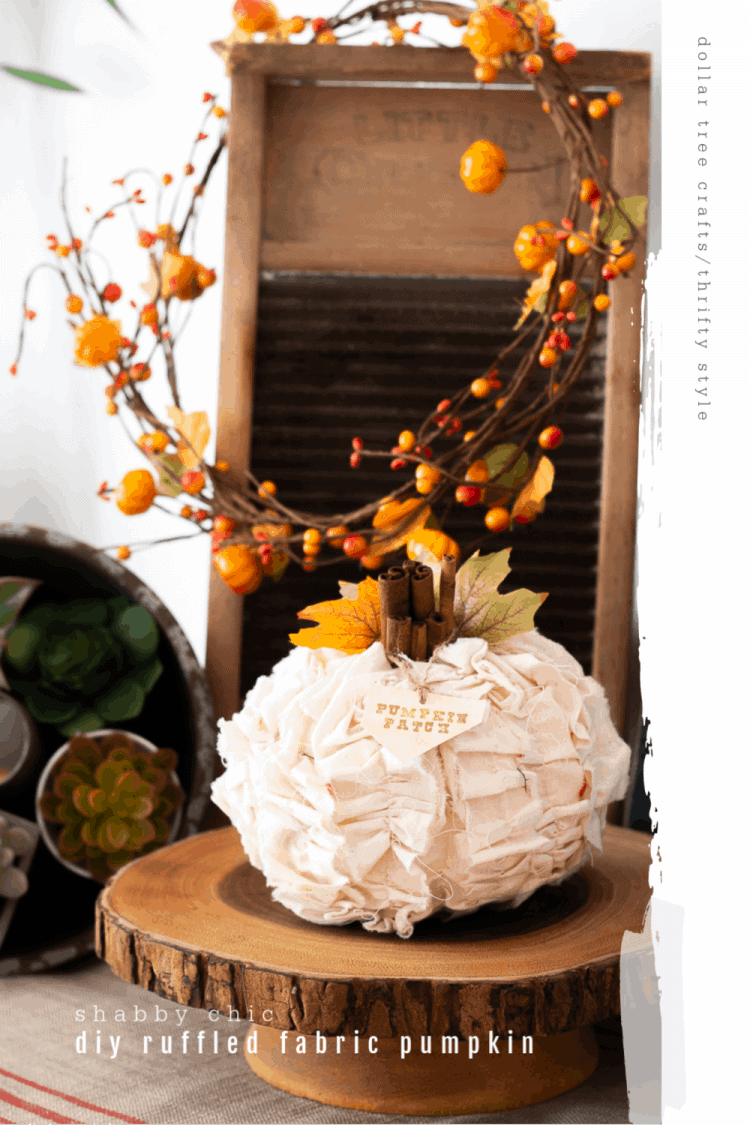 How to Make a DIY Shabby Chic Fabric Pumpkin

Have you ever seen those orange styrofoam-ish pumpkins from the Dollar Tree and wondered what you could do with them?

I have and because they’re cute and only $1.00, I would buy them and then sometimes, they literally just stayed in the bag or *sigh* I would just put them out as is. Ala carte. No DIY. Not even a bow stuck with a straight pin into the little green foam stem.

I know, that’s sort of a DIY’er no-no but it was either during a time of depression, for real, when I only decorated because I didn’t want my guys to think I didn’t care or when I really had no idea what to do with them.

So, when I saw an idea and tutorial to make a ruffly fabric pumpkin YEARS ago, I knew I wanted to make one.

I love the Shabby Chic style but sometimes it’s hard to add it to your autumn decor – until now! This DIY Shabby Chic Fabric Pumpkin is so easy to make and costs less than $5.00!

I bought almost everything I needed at the Dollar Tree with the exception of the fabric, but I have seen some somewhat flimsy dish towels there and I’m wondering if those would work.

What do you think?

Or, you could just go to the fabric store and buy some muslin. I think it’s under $1.00 a yard…so, technically, it would also be a dollar-ish craft item. 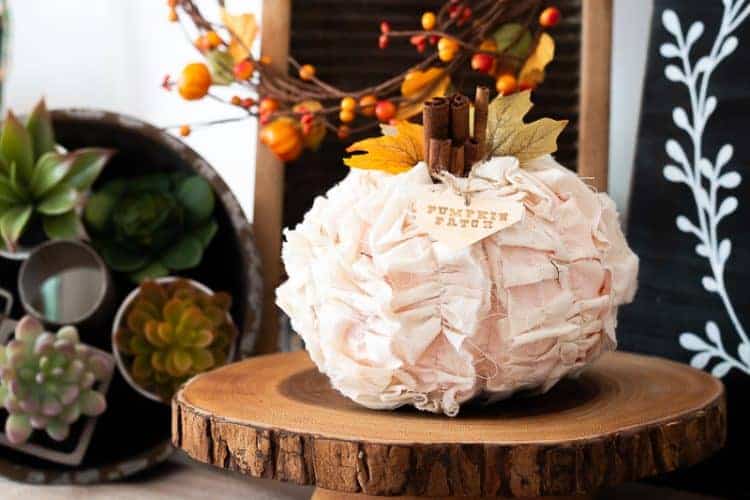 I would love to say that this was my idea, but it wasn’t. My inspiration came from 20 North Ora – I followed her directions almost to a T so please visit her site to see the original but below are the steps I took.

I’m not sure if they make smaller ones, but if they do, it would be cute to make a bunch of these and put them on a farmhouse fall tray like this one.

More Pumpkin Crafts and Some Recipes:

I made this pumpkin years ago and still look forward to getting it out every year.

Do you have something that you can’t wait to get out every year to decorate for fall? 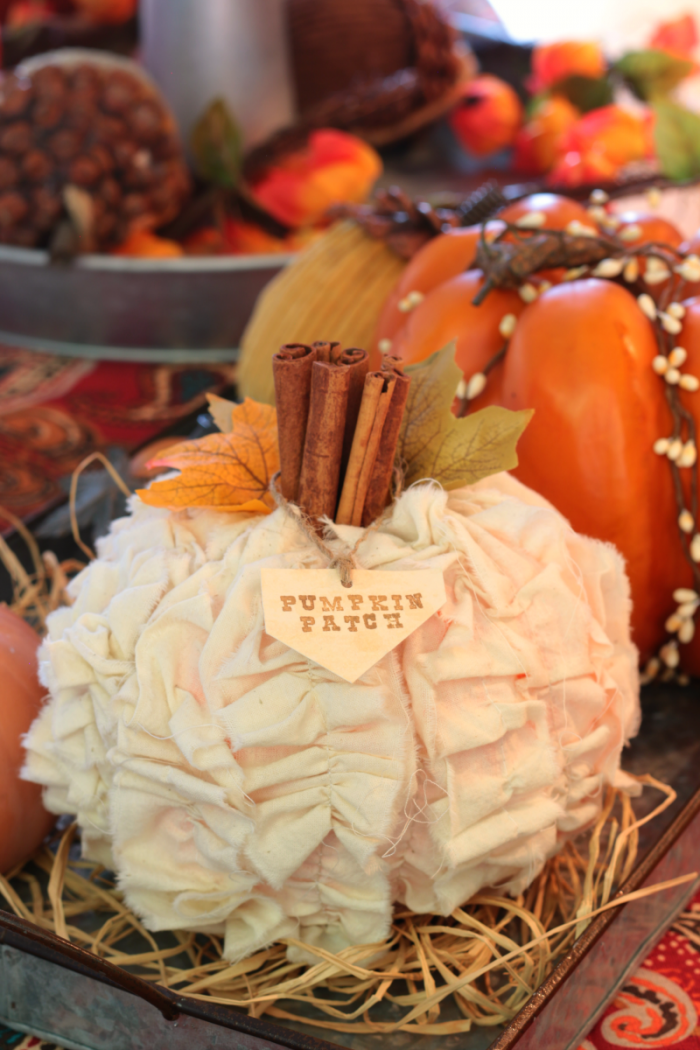 If you make one of these, I would LOVE for you to share the pic with me – feel free to leave a comment below or send me an email at marybeth @ the how to home (dot) com

Mary Beth is a wife, mother to three sons, and a clean freak. She aspires to help others create a happy organized home, and a cozy living space and shares easy recipes, DIYs, and home improvements for busy families. 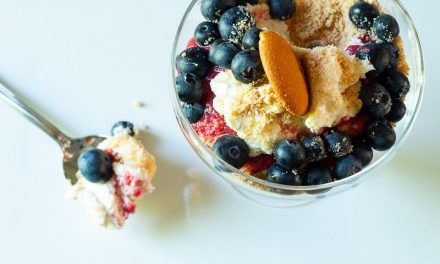 The Easy Way to Put Together a BOO Kit

How to Bleach Pine Cones

Welcome to The How-To Home! I’m Mary Beth and I am so happy you’re here.