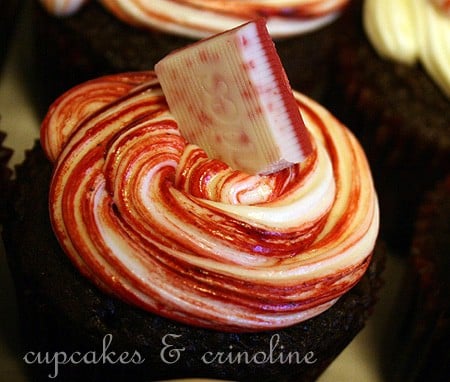 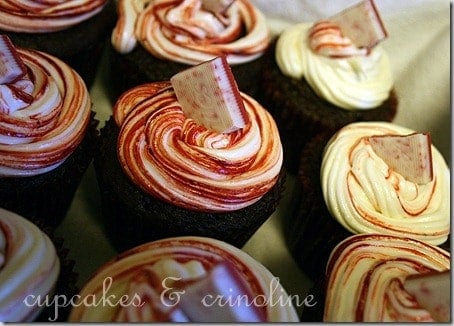 Chocolate and peppermint…could there be a more heavenly combination???? I think not!  I saw these cupcakes on pinterest and had to make some for myself and to share…sometimes sharing is so hard!!!! I made them for our ornament party last week and they were a hit! 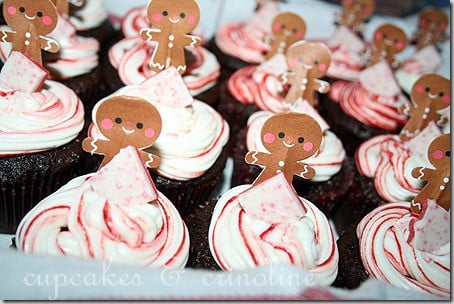 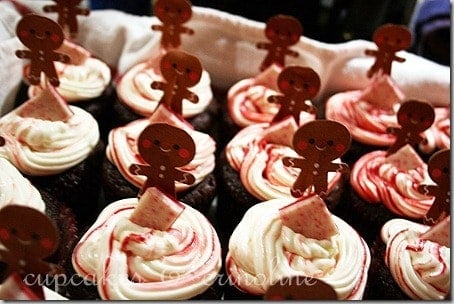 I took some pictures and was almost ready to serve these lovelies when I remembered that I had some gingerbread men cake picks….they were so cute…sort of like an army of gingerbread cupcakes….I surrendered *quite happily* and ate a cupcake.

I made the cupcakes from a boxed cake mix {I know, I know….from scratch is so much better but time wise you gotta do what you gotta do}.  The true gem of this cupcake is the Peppermint Cream Cheese Frosting which is from Glorious Treats and is presented below: 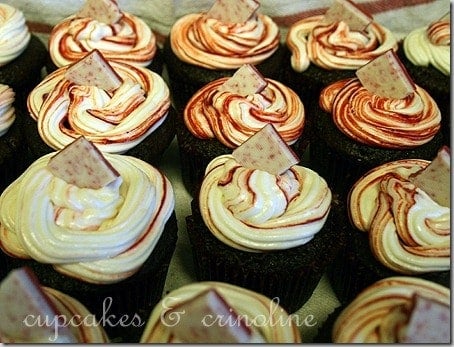 Peppermint Cream Cheese Frosting
½ cup (1 stick, 8 Tablespoons) butter, at room temperature
6 oz. cream cheese, at room temperature (about ¾ of a regular block of cream cheese)
4 cups powdered confectioners sugar
1 teaspoon pure peppermint extract
½ teaspoons pure vanilla extract
1 to 3 Tablespoons heavy cream, heavy whipping cream (or milk although I do like the richness that cream adds)
~ Directions ~
*Place butter in a large mixing bowl and blend slightly. Add cream cheese and blend until combined, about 30 seconds.
*Add powdered sugar (a little at a time) and blend on low-speed until combined. Increase to medium speed and beat until it begins to get fluffy.
*Add vanilla and peppermint extracts
*Slowly add the heavy cream, a little bit at a time until desired consistency is met. (Don't add too much if you want the frosting to stay in place when piped on cupcakes.)
*Beat until fluffy, about 1 minute.
*Use at once or keep refrigerated. (This frosting will keep well in the refrigerator for several days, but you may need to re-beat it for the best texture.)

Top cupcakes with some crushed candy canes (they will "melt" after a bit, so they need to be served right away) or a small piece of peppermint bark (I used a little peppermint Andes candy). *I used the Andes candies…they held up beautifully!* 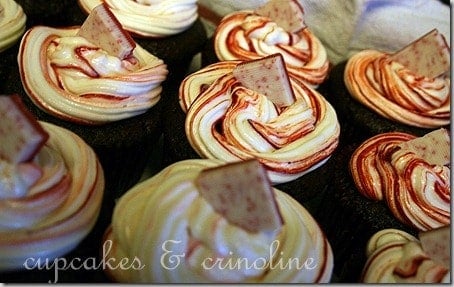 Linking to these lovely people and their lovely places: