This delicious Pulled Pork made in a Slow Cooker is a great addition to your weekly meal plan.

There’s nothing like getting dinner ready in your slow cooker early in the day, setting it, forgetting it, and having it ready when you want! It makes a busy day so much easier.

This celebration Slow Cooker Pulled Pork with Apple Slaw is easy to make and so delicious. It’s perfect for a family dinner, for a tailgate party, or for a special get together celebration.

Serve it with creamy Amish potatoes or air fryer frozen steak fries, and add some buns for sandwiches and you are all set!

What is Pulled Pork?

Pulled pork is an American barbecue dish from the South. It’s made using either a pork shoulder or pork butt.

This dish is called pulled pork because of the way it’s served after being cooked. After in the slow cooker the tender meat is literally pulled apart before serving and can be topped with apple slaw (recipe below) and served on fresh buns.

What is the Best Cut of Pork for Pulled Pork?

Both cuts come from the shoulder of the pig, but pork butt is higher on the foreleg.

They are relatively fatty and tough cuts of meat but benefit from long, slow cooking methods such as in a slow cooker.

While both cuts work well, a pork butt roast is the preferred cut.

Pork Butt Roast but you could also use a pork shoulder.

Fresh buns and a stack of dill pickles on top are a great addition to this recipe.

Did your family love this Slow Cooker Pulled Pork? Be sure to leave a rating and a comment below! 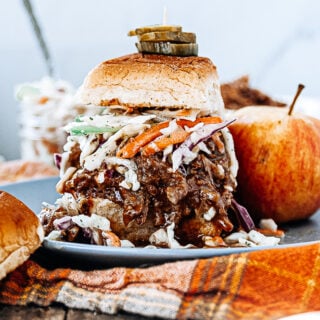 To make the slaw